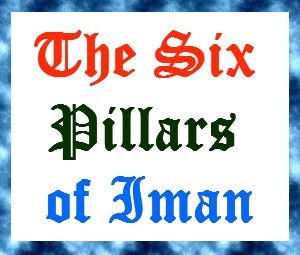 The Six Pillars of Iman, also known as the articles of faith, are a portion of the foundation in which a Muslim’s beliefs stand on. These pillars are very important and hold heavy weight on the Day of Judgement.

1. Belief in Allah.
The first Pillar of Iman is the belief in the All-Powerful, Most Beneficent. Believing in Allah, above all else is the first and most important pillar. It is not only belief in Allah alone but in the way He is described through the Qu’ran and the sayings of Prophet Muhammad (Hadits). This includes all 99 names that describe Allah.

2. Belief in Al-Malaa’ika (The Angels).
The second Pillar of Iman is the belief in Allah’s angels. The angels are messengers of Allah. They were created from light and were created, before humans, for the purpose of worshipping Allah. Al-malaikah the angels, the names and the-responsibilities.

3. Belief in Al Kitab (the books of Allah).
The third Pillar of Iman is the belief in the books of Allah. Here it is the belief that at the time when these books were sent down they truly were a message from Allah. The only book left is the Qur’an in its entirety, because it is the last revelation Allah will send to us. There are four books known to man: The Taurah sent with the Prophet Musa (Moses), the Zabur sent with the Prophet Dawud (David), the Injil sent with Prophet Isa (Jesus) and the Qur’an sent with Prophet Muhammad. We as Muslims are to believe in all of these books and not just the Qur’an.

5. Belief in Yawmil Qiyaamah (Day Of Rising/The Last Day).
The fifth Pillar of Iman is the belief in the Last Day. This is the Day of accounting for all deeds; evil or good, big or small. In our lives we need to believe that all we do will have bearing on the Last Day. No one but Allah knows when this day will come, so it is up to us to live each day as if it was our last.

That a person’s will and ability do not operate outside the will and decree of Allaah, Who is the One Who has given him that ability and made him able to distinguish (between good and evil) and make his choice, as He says (interpretation of the meaning):
“And you cannot will unless (it be) that Allaah wills the Lord of the ‘Aalameen (mankind, jinn and all that exists)”
[al-Takweer 81:29]
That al-qadar is Allaah’s plan for His creation. What He has shown us of it, we know and believe in, and what He has hidden from us, we accept and believe in. We do not dispute with Allaah concerning His actions and rulings with our limited minds and comprehension, rather we believe in Allaah’s complete justice and wisdom, and that He is not to be asked about what He does, may He be glorified and praised.

These six pillars of Iman are important to all Muslims and should be held in high regard.

6 thoughts on “Islam for Kids; The Six Pillars of Iman”