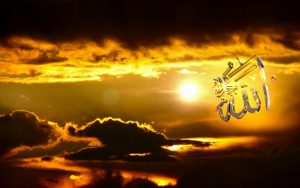 This is the story of Adam and Eve.
For all of you people, read and believe.

At first the whole world contained just the jinn.
Then they began indulging in sin.

The angels were sent to drive them away.
Then Adam (a.s) was created from a type of clay.
From his left rib came Eve(r.a), his beautiful wife.
They lived in paradise, enjoying their life.

The Angels bowed to Adam (a.s) on Allah’s command.
Except Iblis (the devil), he was eternally dammed.
Time went past and they spotted a tree.
Iblis told them it was immortality’s key.

The devil thought himself superior and clever.
And asked the two if they fancied living forever.
All they had to do was to eat from a tree.
but Allah forbade that very same tree.

The devil got the best of the two.
Allah was angry and out of heaven they flew.
They had to leave heaven for only this deed.
The devil was cursed, he deserved it indeed.

Adam (a.s) and Eve (r.a) to the earth they fell.
They had angered the Almighty and hadn’t done well.
They realised the devil had led them astray.
and on earth they repented and continued to pray.

Their repentence was accepted, from their mistake they learned.
Now to re-enter heaven, this had to be earned.
Iblis rejoiced,’ I have fulfilled my aim’.
I’ll mislead all your offspring, I’ll treat them the same.

I will continue to mislead them until it’s too late.
A hundred lusts inside them I’ll create.
So brothers and sisters, don’t let him succeed.
He will lead us to hell, an evil place indeed.

Think about death, we haven’t got long.
Our aim is to prove that the devil is wrong.
Realise our purpose, don’t stray, don’t get bored.
We were created only to worship our Lord.

Live as a muslim, twenty four seven.
And then we’ll meet (in sha Allah), in the very same heaven.