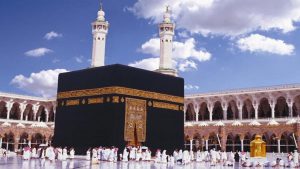 The Ka’aba is the symbolic House of Allah. It is in the centre of Masjid Al-Haram in Makkah. Every Muslim on the planet faces the Ka’aba when performing salah. Isn’t that amazing?

Would you like to know some more amazing things about the Ka’aba?

Here are ten things about the Ka’aba that you probably didn’t know.

1. The Ka’aba is the only building on earth to have had three Prophets build it
Prophet Ibrahim and his son Prophet Ismail built the Ka’aba when Allah commanded them to build a house of worship. Many centuries later when the Ka’aba was being reconstructed due to damage, Prophet Muhammad (saw) himself that put the Black Stone back in its place. No other building on earth has this honour of being built by the hands of so many Prophets!

2. The Ka’aba didn’t always have a roof
Originally, the Ka’aba had only four walls without a roof. It was only centuries later, during the time of Kusayi who was the leader of the Quraysh, was the Ka’aba rebuilt with thicker walls and a roof to give it the shape of a sanctuary.

3. The Ka’aba was rebuilt using halal money only
When the Ka’aba was reconstructed during the lifetime of Prophet Muhammad (saw), the Quraysh wanted to rebuild it using halal money that did not come from haram sources such as interest, cheating, stealing, gambling and so on. Even though the Quraysh were wealthy, there was not enough halal money to rebuild the entire original structure. So it was made smaller. This is how the Ka’aba went from a rectangular shape to the cube shape it is today.

5. The Black Stone used to be white
Hajar al-Aswad is known as the Black Stone, and it is placed in the Eastern corner of the Ka’aba. It was brought from heaven and given to Prophet Ibrahim to be placed in the corner of the Ka’aba. However, when it was first brought down, it was not black! Prophet Muhammad (saw) said that Hajar al-Aswad came from Jannah whiter than milk, but the sins of the sons of Adam turned it black.

6. The door of the Ka’aba is made of gold
The door of the Ka’aba didn’t always used to be made of gold. In 1977, when King Khalid was praying inside Masjid Al-Haram, he noticed scratches at the bottom of the door. He immediately ordered for the door to be remade and coated in gold. The golden door was installed in 1982. It weighs 300kg, is more than three metres high, and has 15 of the 99 names of Allah embroidered in calligraphy. Even the door’s lock is embroidered!

7. The Kiswah that covers the Ka’aba is replaced every year
Every year, on the 9th day of the month of Dhul Hijjah, the Ka’aba gets a new black covering. This black covering, known as the Kiswah, is made out of 670kg of silk and is embroidery of the Quranic verses contains 150kg of gold thread. It is wrapped around the Ka’aba and held down by copper rings.

8. It hasn’t always been black
Different Caliphs and rulers kept changing the colour of the Kiswah. Once, the grandmother of Prophet Muhammad (saw) offered a white Kiswah. Caliphs Umar and Uthman also covered the Ka’aba in white cloth. During the time of Caliph Al-Mamoon, the Ka’aba was draped three times a year with a different colour each time; red, white gabati, and then red again. In 1160, Al-Nasir started a green Kiswah. When Al-Mamoon and Al-Nasir disagreed on the many colour changes, they decided to change the colour to black. The black Kiswah remains as tradition up to this day.

9. The Ka’aba has many names
The Ka’aba is called by many names in the Quran and hadith, including Bait ul Haram (Sacred House), Bait Ullah (House of Allah), Bait al-Ateeq (Ancient House), and Awal ul Bait (First House).

10. Even floods did not stop the pilgrims!
Before there was flood control systems and sewage, floods would frequently happen at Masjid al-Haram whenever it rained heavily. Sometimes, the Ka’aba would be half submerged in water for days. Muslims did not let this stop them from having the honour of worshiping Allah at the Ka’aba, and they would simply swim around the Ka’aba to perform tawaf!

Author Bio:
Lisa Zahran is a writer and copywriter who has worked with New York Times bestselling authors and personal development organizations such as Productive Muslim and Mindvalley. As CCO at Quran Academy, she’s authored a transformative ebook that can help make Quran memorization easier and more meaningful in your daily life. Experience this ebook plus a 14-day trial of Quran Companion for free today.