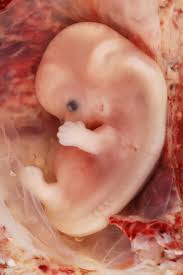 New images have been found revealing amazing truths behind verses in the Qur’an that depict the embryonic development.

The Qur’an said to be the word of God (Allah) and such miraculous phenomena are used to authenticate this statement.

The Qur’an mentions the term ‘alaqah علقة as the second stage of human prenatal development. The word ‘alaqah according to many linguistic Arabic dictionaries has several meanings: “leech”, “coagulated blood”, “blood clot”, or “the early stage of the embryo”.  In this illustrated paper, the term ‘alaqah is defined and described in detail. The general shape of the embryo is described,  internal events such as the formation of blood and closed vessels are mentioned as well as the attachment of the embryo to the placenta. Until recently these details were not fully appreciated, since they referred to details in human development which were scientifically unknown in earlier times.

You can download free ebooks about Embryology in the Qur’an here: