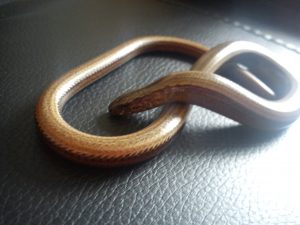 We found a slow worm. We thought it was a snake but after we asked Mr.Google, we found out that it is called a slow worm or a legless lizards. Learn something new everyday.

Let’s read the facts about the Slow worms. 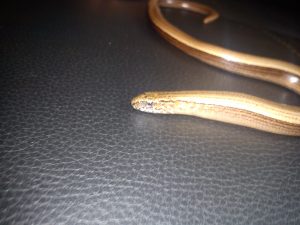 The Slow worms (Anguis fragilis) are actually legless lizards that look like snakes. They are often found in gardens, in long grass and other damp environments and are widespread throughout the British Isles. They also known as the blindworms. But they are neither slow nor blind. 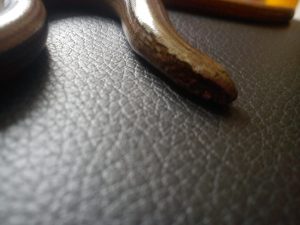 Like many other lizards, slow worms autotomize, meaning that they have the ability to shed their tails in order to escape predators. The tail regrows, but remains smaller.

They are carnivorous because they feed on slugs, worms, spiders and snails.

The females give birth to live young (ovoviviparous birth). Ovoviviparous 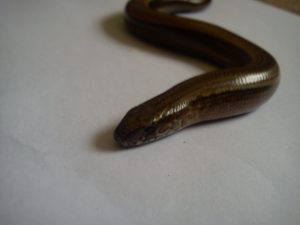 animals produce eggs inside their body, but then give birth to live young. The eggs hatch out inside the mother and the offspring stay within her for a time. She later gives birth to the them. While they are within her, the young are fed on the yolk of the egg, and not directly from the mother’s body.

They hibernate during the cold months of winter. They mate in April 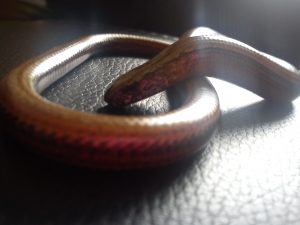 or May shortly after hibernation. Most young will be born in August but cooler temperatures can cause prolonged incubations and could delay the event until October or even later.

Adult slow worms grow to be about 50 cm long and are known for their exceptionally long life; it has been said that a slow worm is the longest- 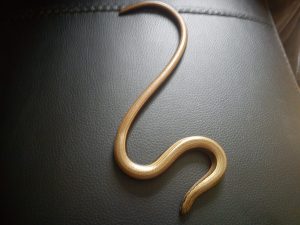 living lizard, living about thirty years in the wild and up to fifty-four years in captivity (this record is held by a male slow worm that lived at the Copenhagen Zoo from 1962 to 2009).

Although these lizards are often mistaken for snakes, there are a number of features that differentiate them from snakes. The most important is they have small eyes 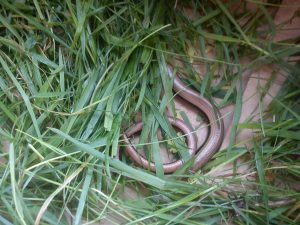 with eyelids that blink like lizards. This is a feature that is not found in snakes. They may also have visible ears like lizards do, which snakes do not have. They shed their skin in patches like other lizards, rather than the whole skin as most snakes do.

In the United Kingdom the slow worm has been granted protected status, alongside all other native British reptile species. The slow worm has been decreasing in numbers, and under the Wildlife and Countryside Act 1981 it is illegal to intentionally kill, injure, sell or advertise to sell them. 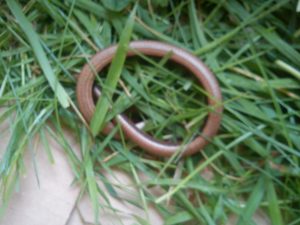 So next time you see it, dont be scared. It won’t bite insha Allah.

If you like this article please leave your comments.