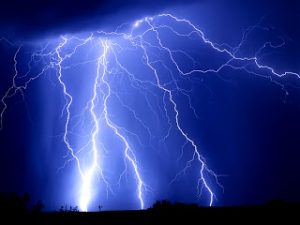 Saying Subhana Allah when seeing the lightning or hearing the thunder is a supererogatory act.

Abu Dawood reported in his book of ‘Maraseel’ from Ubaidullah Ibn Abi J’afar that the Prophet (Sallallahu Alaihi wa Sallam) said: “If you hear the thunder say ‘Subhana Allah’ but do not say ‘Allahu Akbar’“ .

It is also reported that Caliph Ali Ibn Abu Talib “used to say when hearing the thunder:

سبحان من سبّحت” بحمده” (Glorified is He Whom the thunder glorifies and praises)“ .

This was also reported fromAbdullah Ibn Zbair and others.
al-Tirmizi , Ahmad and al-Bukhari in his book ‘Adab al-Mufrad’ reported that “The Prophet (Sallallahu Alaihi wa Sallam) used to say when hearing the thunder or the thunderbolt: “O Allah do not kill us with Your Anger and do not destroy us with Your Punishment and give us Your Peace before that all” .