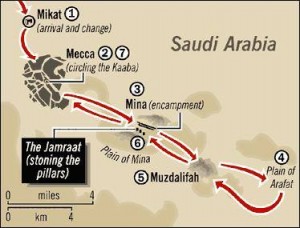 The challenge for day 3;

By now, the children have had some hands-on fun while learning about this pillar of faith. Next, it’s time to enhance this knowledge by poring over some well-illustrated books.

On day 3, we learned about the Hajj rituals. Please see the maps below; 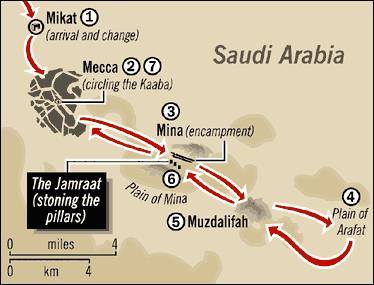 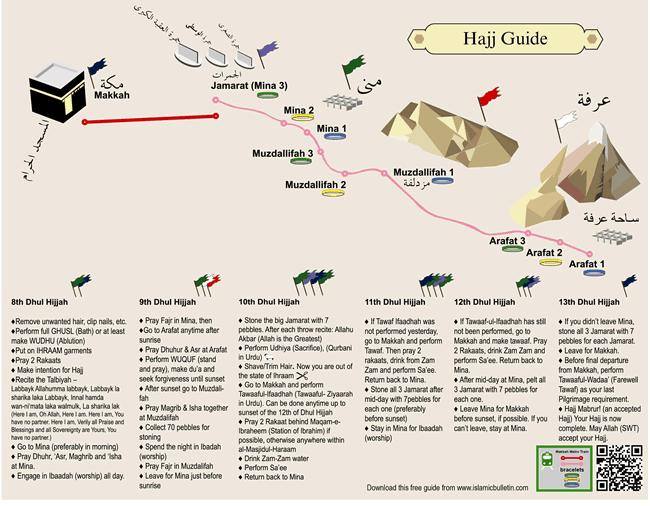 When a pilgrim reaches the Miqaat – a place which he should not pass by except in a state of Ihraam – he should perform ghusl (i.e. a ritual bath), apply perfume, and wear an upper and a lower garment.  Women should wear the usual clothing that is legally prescribed for them.

Then, the pilgrim begins the ritual (i.e. assumes the state of Ihraam) and starts uttering talbiyah by saying “Labbayk Allaahumma Hajjan” (In response to You call O Allaah I perform Hajj). After that, the pilgrim utters the talbiyah which the Prophet, sallallaahu alayhi wa sallam, used to say:

A pilgrim should frequently utter talbiyah.

After the circumambulation is over, a pilgrim should pray two Rak`ahs behind Maqaam Ibraaheem (The Station of Ibraaheem) or wherever he is able to.

It is desirable for a pilgrim to drink some Zamzam water.

After that, he starts the second round from Al-Marwah to As-Safaa, until he finishes the seven rounds ending at Al-Marwah.

Surah 2:158 → Indeed, as-Safa and al-Marwah are among the symbols of Allah. So whoever makes Hajj to the House or performs ‘umrah – there is no blame upon him for walking between them. And whoever volunteers good – then indeed, Allah is appreciative and Knowing. (www.quran.com)

Standing at `Arafah is one of the pillars of Hajj without which it is invalid. A pilgrim should head for `Arafah after sunrise of the ninth (9th) day of Dhul-Hijjah. It is desirable to reach `Arafah at midday before the sun reaches its zenith (highest point) so that he can perform Dhuhr and ‘Asr Prayers combined at noon along with the Muslims (shortened to two Rak’ahs). It is desirable for a pilgrim to earnestly supplicate Allaah during his stay in `Arafah (Standing at `Arafah refers to the pilgrim’s stay there whether he is standing up or sitting down).

Additionally, a pilgrim should frequently utter talbiyah, remember Allaah, glorify Him, and invoke Him and exalt the Prophet, sallallaahu alayhi wa sallam, as much as he is able.

On the day of `Arafah, Allaah bestows His favors on His slaves who strive to attain His Pleasure, and He makes the Angels bear witness that He has forgiven their sins.

Surah 2:198 → There is no blame upon you for seeking bounty from your Lord [during Hajj]. But when you depart from ‘Arafat, remember Allah at al- Mash’ar al-Haram. And remember Him, as He has guided you, for indeed, you were before that among those astray.

Onrush to Muzdalifah and Spending the Night There

After sunset of the ninth of Dhul-Hijjah, a pilgrim heads for Muzdalifah where he performs the Maghrib and ‘Ishaa Prayers combined and spends the night there (while shortening ‘Ishaa’ to two Rak’ahs).

After Fajr Prayer of the tenth (10th) of Dhul-Hijjah, it is desirable for a pilgrim to head for Minaa. Once he reaches Minaa, he should go to the Grand `Aqabah Jamrah and throw seven pebbles at it. Upon throwing each pebble, it is desirable to utter takbeer.

After throwing the pebbles, a male pilgrim must either shave his hair or cut it, but it is better for him to shave it. As for female pilgrims, they should only cut a small part of their hair.

The pilgrim returns to Makkah to perform the Ifaadhah circumambulation which is one of the pillars of Hajj, and it is performed in the same way as the first circumambulation. Once done, all the aforementioned prohibited acts for the pilgrim become permissible.

The pilgrim returns to Minaa to spend the eleventh, twelfth, and thirteenth of Dhul-Hijjah. Each day, a pilgrim throws seven pebbles at each of the three Jamrahs. The pilgrim should start with the Smaller Jamrah which is near Al-Kheef Mosque, then the Middle Jamrah, and finish with the Larger Jamrah which is next to Al-`Aqabah.

If a pilgrim is physically unable to throw the pebbles, it is permissible to delegate another pilgrim to do so on his behalf. It is also permissible for the pilgrim to spend only the eleventh and the twelfth of Dhul-Hijjah in Minaa.

The challenge for day 4;

Color the image of Ka’bah and puppet figures found here. I would suggest sticking them on popsicle sticks. Then take the stick puppets around the Ka’bah while reciting the talbiya